Regularly posted news and announcements that matter to you.

Big, Scopey and Rideable Never Goes out of Style

For the Upcoming 2023 Breeding Season We Recommend the Warmblood Stallion

FEI Grand Prix Show Jumper with an impressive record at major competitions in Europe and the US. 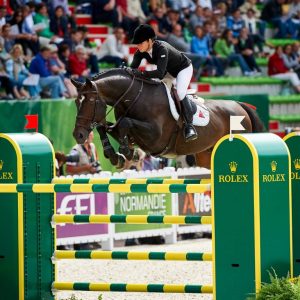 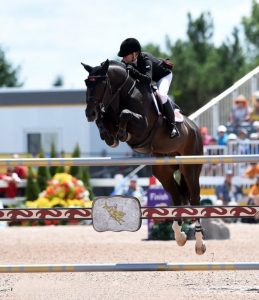 His sire, the famous Voltaire, maintained top spots in the World Showjumping Sire Rankings for years.
Like his sire, Tamerino is an excellent stallion for hunter breeding. Tamerino’s dam Bianca III is from the famous Holsteiner line 4847.
Full pedigree available at TAMERINO | HorseTelex. 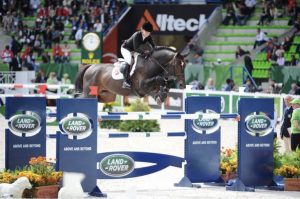 Our regular email account is working again, but we have decided to keep the gmail-account in addition.
So you have the choice to reach us via

To US and Canadian Mare Owners

Recommending for your consideration with the breeding goals of Eventing and Dressage: 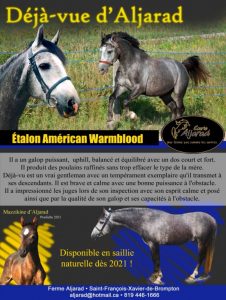 The Horse asked researchers and equestrian federation representatives for their takes on the new FEI rule banning shaving of facial vibrissae, which are sensory organs commonly called “whiskers.”

Removing long facial hairs that help horses “see” their close surroundings could deprive them of a safety mechanism and possibly make them feel disoriented. As such, the recent decision of the Fédération Equestre Internationale (FEI) to ban removal of horses’ “sensory hairs”—the whiskers around the mouth and eyes—constitutes an important move to safeguard equine welfare, according to equine veterinary researchers and industry leaders.

“The move by the FEI to ban the trimming of equine whiskers is to be applauded,” said Roly Owers, MRCVS, CEO of World Horse Welfare, in Norfolk, U.K., an international charity partnering with the Removing long facial hairs that help horses “see” their close surroundings could deprive them of a safety mechanism and possibly make them feel disoriented. As such, the recent decision of the Fédération Equestre Internationale (FEI) to ban removal of horses’ “sensory hairs”—the whiskers around the mouth and eyes—constitutes an important move to safeguard equine welfare, according to equine veterinary researchers and industry leaders.

“The move by the FEI to ban the trimming of equine whiskers is to be applauded,” said Roly Owers, MRCVS, CEO of World Horse Welfare, in Norfolk, U.K., an international charity partnering with the FEI on welfare matters for more than 30 years. “Whiskers, or vibrissae, play an important sensory role in protecting the muzzle and eyes of the horse and, hence, removing them because it looks neat is completely unjustifiable.”

Horses appear to rely on sensory hairs for judging how close their heads are to objects, especially when they’re so close they can’t see in front of their noses, since their eyes are on the sides of their heads, said Machteld van Dierendonck, PhD, who’s associated with the Faculty of Veterinary Medicine at Utrecht University, the Netherlands.

“All vibrissae are a kind of safety measure, not only above the eye (where horses have seven vibrissae on each side, including a ‘very, very long one’ nearest the nose),” van Dierendonck said. “Because a horse is not able to ’see’ under his nose, he ‘sees’ with his vibrissae.

“In a domestic stable environment, they need their vibrissae much more than in a natural environment, since there are many more obstacles—doors, grids, stable sides, buckets, etc.—than they would ever encounter in the wild,” she continued. Her review of previously collected data even suggested that horses with shortened vibrissae might have had a slightly greater tendency to incur more head injuries than those with intact vibrissae, she said.

Federations on Board To Stop Whisker Cutting

The FEI sought to “align its regulations with those of National Federations (Germany, Switzerland, France) which had already banned this practice,” said Hall. “We were pleased with the support the rule received through the Rules Revision process in the lead up to the November vote at the FEI Online General Assembly,” she told The Horse.

During that revision process, the German Federation encouraged the FEI to include a ban on clipping ear hairs as well—which is also illegal in Germany—but the FEI opted to keep ear hairs out of the ban for the moment. That’s “not surprising,” said Owers, who explained that ear hairs are “not whiskers” and “do not perform the same function” of providing sensory details about nearby objects. “The key issue with clipping/trimming hair around the ear is how well the horse responds to that—and, hence, what risk is posed to horse and trimmer,” he said.

Meanwhile, the United States Equestrian Federation (USEF) expressed concern that the rules outlining the new FEI ban were “too subjective” and would be difficult to enforce, especially with regard to how much hair might have been clipped. “Since clipping the sensory hairs results in disqualification, is it to be understood that any trimming or shortening of these hairs would cause disqualification?” the Federation’s representatives wrote to the FEI during the rules revision process. USEF additionally stated that long hairs around the eyes could get tangled in blinders used during driving competitions, causing the horse discomfort. However, the FEI assured that this would not be an issue and that the ban’s wording should remain as is.

Despite its original concerns, USEF supports the ban, said Will Connell, USEF director of sport. “The ban on the shaving of sensory hairs already exists in a number of European countries, so for athletes that have been competing internationally, this will not present a huge change,” he said. “USEF did raise a question in response to the initial rule proposal, but the safeguards around the rule are sufficient should there be an issue relating to driving blinkers. USEF will now work to make sure all U.S. FEI athletes are aware of the restriction.”

Ultimately, cutting off sensory hairs impairs equine welfare purely for aesthetic purposes, and the FEI ban “makes this very clear,” Owers. But protecting FEI competition horses is only part of the effort. “It is even more important to educate owners to understand the sensory role that whiskers perform,” he said.

To test whisker function in horses, von Dierendonck and her students found that horses with clipped whiskers generally bumped their noses against the bottom of shortened buckets (not the depth the horses expected), but horses with intact whiskers didn’t. They also saw that, especially in younger horses, the animals seemed to lose their balance and sense of orientation for about a half hour after having their whiskers experimentally shaved off. However, because it’s nearly impossible to “blind” the researchers observing the horses (hiding from them which horses were shaved and which weren’t, to avoid bias), the study results haven’t been scientifically validated, she said.

Due to the present Covid-19 restrictions, we are forced to adjust our traditional inspection procedures.

We, therefore, have determined that the best solution, for now, is to accept video submissions sent to us on CDs/DVDs.

Details will be provided at the time of registration of your horses.

As of January 1, 2019, SafeSport Training is mandatory for all USEF Competing Members 18 years of age and older to participate in USEF-licensed competitions.

USHJA Microchip Rule in Full Effect as per Dec 1, 2018

Please be aware that as of the above date, ALL horses competing in classes which require USHJA registration will be ineligible to compete in Federation licensed competitions – unless the owner can provide a microchip number for the horse that verifies the animal’s identity.

To make sure, check your USEF account as to whether your horse has a microchip number registered.

AWR will gladly provide microchips for all their previously registered horses. Owners with current membership can request a microchip using this  form.

News have recently appeared through various channels concerning WFFS, a genetic defect of connective tissue found in warmblood populations. Signs of the disease include abnormally thin and fragile skin, hyperextension of limb articulations, hematomas, premature births, and others. Newborn foals have to be euthanized as this condition, unfortunately, is untreatable.

WFFS is inherited as an ‘autosomal recessive defect’ which means that both male and female horses are equally affected and that two copies of the mutation are needed to cause this fatal disorder. Horses that carry one copy do not show any WFFS defect but can, as ‘carriers’, transmit the mutation to 50% of their offspring. Mating of two carriers provides a 25% chance of producing WFFS foals.
The incidence of carriers in the Warmblood Horse world is estimated by scientists at 9-11%, some say 10-15%!

So what should warmblood horse breeders do now to make responsible breeding decisions, i.e. to ensure that their own stallions and/or broodmares are free of this defect and do not transmit the fatal mutation to their offspring and/or to outside warmbloods?

AWR has teamed up with UC Davis to offer WFFS testing for all their registered and DNA typed warmbloods without having to send in another hair sample which makes it very simple. There is a test order form available on the AWR website; alternatively, test orders can be called in. WFFS tests can also be ordered in conjunction with the DNA typing of newly registered warmbloods.

Mare owners planning to obtain semen from foreign or US-based/bred stallions should request proof that the chosen stallion is NOT a WFFS carrier.

AWR will keep you informed as things develop. Please contact us directly if you have questions.

FROM THE DESK OF THE

For the Attention of Show Organizers and Competitors

There seems to be some confusion about the documentation of Flu/Rhino vaccinations. Rule Art 6.3 says that equines entering an event venue must have had Flu/Rhino vaccinations within 6 months prior to entering that venue. This is usually done twice a year…My ponies are vaccinated in January and June because it’s easier for me to remember. (Here in Florida, I also vaccinate for Eastern/ Western/West Nile and Rabies, although not on the same day. Those vaccinations don’t have to be documented.)Documentation can be either a receipt/letter on the Vet’s letterhead stating the name, serial number and expiration date of the vaccine, a passport (National or FEI) which is filled in with the same information and is signed and stamped by the Vet or, in the case of a vaccination given by the Person Responsible (usually the owner) a signed receipt showing purchase of the vaccine.In the case of the PR giving the shot, the PR must have a receipt from the Vet or Clinic from whom they purchased the vaccine which cites the name of the Clinic or Vet, the name, serial number and expiration of the vaccine. Usually this winds up being the cash/credit card/check receipt.

What Organizers ask for is proof that the animal actually received the shot. In the case of the Vet/Clinic’s letter, that is pretty conclusive evidence that the vaccination was given. Same with a passport as the Vet has to sign both of those documents.

The Organizer has to take the PR’s word for it that the shot was given as the only documentation is a receipt. There isn’t a Vet signature and stamp. I do suppose that provides a chance that the receipt was faked and the shot wasn’t actually given. Why (or how) anyone would do this is a mystery as the vaccinations are for the good of the animal and the peace of mind of the Owner and other competitors.

There is a third situation which happens when an animal has had a bad reaction to the vaccine. In that case, the PR has to have a Vet’s letter stating that the animal cannot be given the vaccination. Then the PR must be able, if asked, to furnish a log of the animal’s temperature taken twice daily for a week before the competition. Temps also must be taken twice daily while on the show grounds and a log of those shown to the Organizer, TD or Steward when asked for.

The Organizer merely wants proof that the vaccination was given. Any of the above methods of proof are acceptable.

Visit http://warmbloodnews.com for the latest news from the world of the American Warmblood and the NorthAmerican Sportpony.